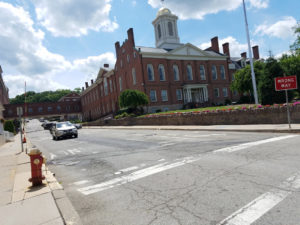 Morris County is expected to begin a project next week on busy Court Street in Morristown, at the hub of county government and the state court system, that will impact vehicular and pedestrian traffic for about 30 days.

Road and Sidewalk Project Starting on Court Street at County Government and Courthouse Complex
Court Street in Morristown, which will be paved as part of a road and sidewalk project starting next week.

The Morris County Engineer’s Office will undertake full reconstruction of the sidewalks on both sides of the street, from Ann Street to Washington Street, followed by the repaving of the street, with work expected to start next Monday, July 23.

During the project, parking will be prohibited on Court Street. The road will be open to one lane of traffic during contractor working hours on weekdays and fully open at all other times during the reconstruction of the sidewalk.

The curb and sidewalk first will be removed and replaced on the courthhouse side of the street, from the bridge that connects the two buildings down to Washington Street. Once completed, the contractor will move to the Administration and Records Building side of Court Street, where the curb and sidewalk will be replaced from Ann Street to Washington Street.

Upon completion of the curb and sidewalk work, the contractor will schedule a four-day full closure of Court Street (including a weekend) to remove the current asphalt and repave and stripe the street. The county will make an announcement of the dates for full closure prior to that phase of the work.

Sidewalks will be available for most of the project but may be intermittently closed when the roadway is fully closed to be repaved. The bid is being done by AJM Contractors of Clifton at a bid cost of $504,372.

When completed, the new sidewalks will match downtown Morristown’s sidewalk pattern, and will have street lighting that also matches Morristown’s design.